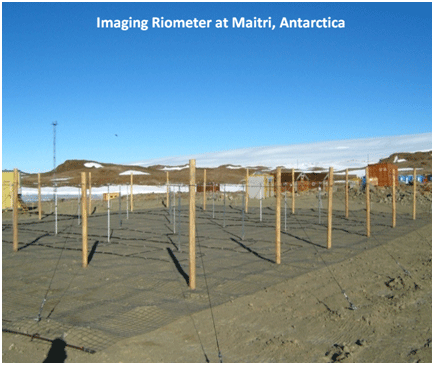 Indian Institute of Geomagnetism (IIG) has been carrying out geomagnetic field measurements in Antarctica since first Antarctic Expedition. Studies have indicated the importance of the location of Maitri as a sub-auroral station, which moves in and out of auroral oval depending upon the level of geomagnetic activity. The importance of carrying out magnetic field measurements from Maitri in space weather monitoring has been brought out in a number of studies. The past two decades of experimental geomagnetism at Maitri have revealed that Maitri is ideally suited for nowcasting Geospace Weather, and perhaps the interplanetary.

Various dynamic processes in the near-Earth space environment, driven by the transient solar activity, severely affect the space weather over the Polar Regions. Global magnetic field observations are used as important tools for studying solar-terrestrial interaction in different regions of the Earth. Magnetospheric substorms lead to the intensification of ionospheric currents and auroral outbursts within the auroral oval (60o-70o magnetic latitude), which may expand significantly in the equatorward as well as poleward direction. The characteristics of eastward and westward auroral electrojets vary with the geomagnetic activity level, local time, season, etc. Indian research bases, Maitri and Bharati, are suitably located near the boundaries of the most dynamic region called the auroral oval.

Cosmic noise absorption (CNA), measured by imaging riometer, is an excellent tool to study the high latitude D-region ionospheric conditions and dynamics. CNA is a consequence of particle precipitation either from the tail region directly or from the ring current region resulting from pitch angle scattering due to wave-particle interaction. The study of Global Electric Circuit (GEC) provides a platform for understanding the solar-terrestrial relationship and associated changes in surface weather. Continuous measurements are carried out to understand the link between the surface electrical environment and space weather events.  Schumann resonances (SRs) are the AC components of GEC and are excited by the lightning activity within the Earth-ionosphere waveguide. In order to understand the effect of geomagnetic conditions on AC component of GEC, continuous measurements of high resolution and high accuracy magnetic field variations are carried out through Induction coil magnetometers at Maitri and Bharati.

To understand Lithospheric subsurface structures and tectonic movements of Antarctic regions, continuous GPS measurements are carried out in Antarctica at Maitri and Bharati. The institute also participated in the Indian Arctic Expeditions for 4 years (2013-2017) operating GPS for the ‘Study of Mass Balance and Dynamics of the Glaciers around Ny-Alesund, Spitsbergen, Svalbard’, Arctic region of Norway.