Plate tectonic theory explains that, Earth’s lithospheric plates move relative to each other mainly due to the radioactive convection current activity in the mantle. These continuously moving plates spread away at mid-oceanic ridges, converge at subduction zones, slip past one another at transform regions. Such movements/interactions are responsible for the slow accumulation of strain (builds up over hundred to thousand of years) in the cold upper part of the crust/lithosphere and eventually be released, often in the form of earthquakes.  Earthquake triggers when inter-seismic accumulation strain results in a level of stress that can no longer be supported by friction on the inter-plate boundary or intra-pate fault. Hence monitoring of plate motion and study of active tectonics, seismic activity and seismic hazard evaluations have become primarily concern and a major research areas since the plate tectonic hypothesis.

During earlier stage, palaeomagnetism and seismological data provided the information of spreading anomalies and demarcation of the plate boundaries respectively.  However, after the advent of space geodetic techniques the quality and quantity of the space measurements dramatically increased the ability to monitor the plate motion to understand the active tectonic or seismic processes at all scales over the past two decades. Further Global Navigation Satellite System (GNSS) (sine 1980s) and Synthetic Aperture Radar Interferometry (InSAR) (since 1992s)   GNSS and InSAR have led to a revolution in lithospheric deformation studies with its ability to measure the station positions in few millimeter level accuracy and highly precise surface deformation measurements from remote sensing data respectively.

Considering the importance of the Indian plate's geodynamical settings, its continuous collision with Eurasian plate and consequential ongoing inter-pate and intra-plate seismic activities, to provide better opportunity to understand the pre-, co- and post-seismic behavior of the Indian lithosphere, the Institute of Geomagnetism (IIG) has initiated and started the GNSS and InSAR investigations in seismically active regions of Western Maharashtra, Himalayas, Kutch, Andaman-Nicobar Islands and NE India, over India plate since ~1995.  To augment and facilitate these studies ~15 GNSS permanent sites have been established at different parts of seismically active regions of Indian plate and data are being collected continuously since ~2005. 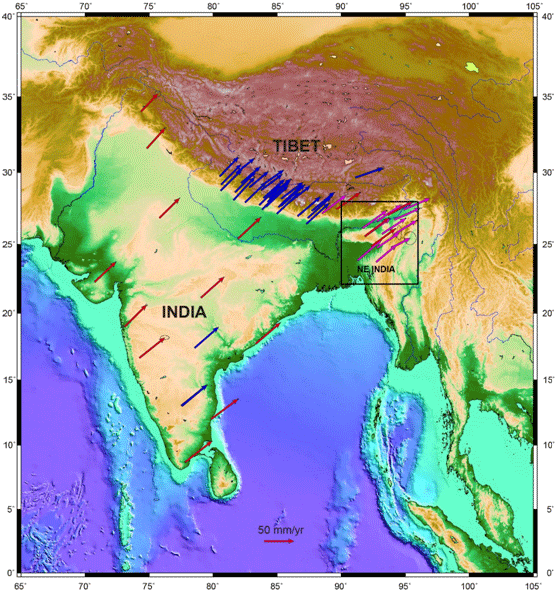 Sudden slip at plate boundaries or intra-plate faults results surface deformation in vertical and horizontal directions during an earthquake and produces pressure wave variations in the coupled adjacent atmosphere. These neutral atmospheric perturbations, in general in the range of acoustic waves, propagate upward in the region of decreasing ambient neutral density. Thus, the perturbation amplitudes increase with altitudes. These perturbations once arrive at the ionospheric altitudes redistribute the plasma density through ion-neutral collisions and generate ionospheric perturbations termed as co-seismic ionospheric perturbations (CIP). Despite reasonably good efforts, the coupling between the lithosphere, atmosphere and ionosphere during seismic events is not understood fully. This multidisciplinary study undoubtedly requires joint efforts by both ionospheric and solid earth experts.  Indian Institute of Geomagnetism (IIG) with its scientists working in the multi-disciplinary areas is the adequate place to embark upon this study. 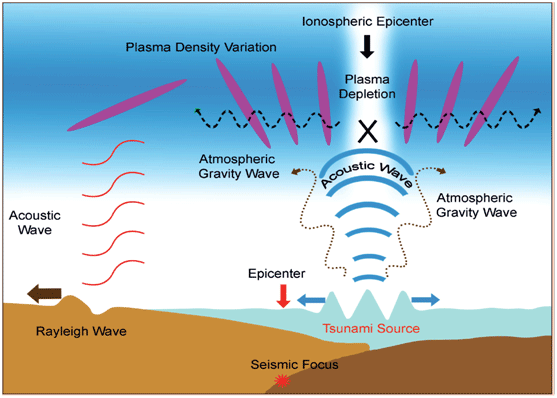 Northeast Indian region is one of the most complex plate boundaries in the world that have resulted from the ongoing north-east collision of the Indian lithosphere beneath the Eurasian plate along the Himalayan and Indo-Burmese arc systems. Presence of these east-west and north-south oriented two major subduction zones as well as large active faults are responsible for the two catastrophic earthquakes Mw 8.1, 12 June 1897 earthquake at Shillong plateau and Mw 8.5 Assam earthquake of 15 August 1950 in the vicinity of the India-China border in the past. Considering the historical seismic reviews and high occurrence of smaller to moderate earthquakes, Northeast Indian region comes under seismic Zone V, which is classified as one of the most seismically hazardous regions in India.