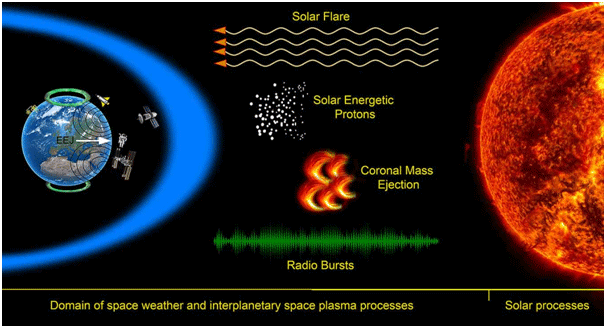 Space weather can be described as the weather of the Sun-Earth system. It is entirely different from the weather that occurs in the earth’s atmosphere in terms of changes in meteorological parameters like rain, heat, cloudiness, and dryness etc. Like the atmospheric weather, space weather does affect our daily life but in a different way.

The Sun is the main source of energy for all living systems on the Earth. The electromagnetic radiation from the Sun shows a cyclical variation with a period of about 11 years. In addition to this, the sun shows periodic changes in the evolution and cessation of irregular structures at its surface. These structures are called as sunspots. The sunspots are associated with strong magnetic fields and surrounded by active regions within which they could grow. During solar maximum, violent eruptions mostly from the solar active regions around the sunspots release bursts of solar energy in the form of electromagnetic radiation, charged particle radiation and magnetic fields in to the interplanetary medium, which abruptly change the space weather by varying the plasma, magnetic field and radiation structure at the earth-near space environment. The earth’s magnetosphere acts as a protective shield preventing harmful solar wind particles entering deep into the atmosphere.

The violent eruptions are generally in the form of solar flares or Coronal Mass Ejections (CME) or both. CME is a transient event that carries clouds of charged particles along with the magnetic field from the solar corona. In case of earthward flares and CME, a portion of the solar energy and mass may interact with the earth and can cause significant disturbances in the geomagnetic field, called Geomagnetic storms.  During geomagnetic storms, the energy transfer from the solar wind to the magnetosphere-ionosphere-thermosphere (MIT) system changes the total energy budget of this integrated system and cause to vary the system in a complex manner. The enhanced electric currents over the auroral region during severe space weather events can disrupt the electric power transmission lines which lead to the electricity shut down. The enhanced current also increases the corrosion of the buried pipelines which generally carry gas and oil. The ionospheric electron density shows a dramatic increase and decreases during flare and CME events which can disturb the HF radio communications in addition to the satellite-based ground navigation. On the occasions, the navigation satellite signals from experience extra delay while traveling through the disturbed ionosphere and provide erroneous positioning and navigation information. The enhanced EUV radiations during flare events heat the neutral atmosphere causing it to expand. This introduces the extra drag on the near Earth-orbiting satellite and thus reduces the lifespan of the low Earth-orbiting satellite. Though the behavior of the MIT system during space weather events is documented well in the literature, the quantification on the storm time changes in the magnetospheric current systems, magnetospheric wave (e.g. ULF) characteristics, electrodynamical and neutral dynamical coupling between high and low latitude thermosphere-ionosphere regime is not understood in its entirety.

Due to this ever-increasing dependency on technological systems, severe space weather can cause extensive social and economic disruptions in the modern high-tech society.  Therefore, space weather forecasts are important that can alert the users about the severity of space weather with sufficient lead time in order to mitigate from its effects. At Indian Institute of Geomagnetism, the new interdisciplinary research is focused on the crucial aspects of Sun-Earth interactions by careful analysis of solar wind parameters and the changes in the ionosphere-thermosphere during space weather periods.