HERD - Hazard, Evolution and Resources of the Deccan volcanic province

The Deccan Volcanic Province (DVP) in the central part of Peninsular India covering an area of 500,000 sq km is one of the largest flood basalt provinces in the world. It has been hypothesised that the flood basalt have been erupted within a narrow time span at or near the Cretaceous/Tertiary boundary (65 Ma, Courtillot et al., 1988) when the Indian subcontinent moved over the Reunion hotspot (Morgan, 1972; White and McKenzie, 1989). It has also been argued that the voluminous Deccan lavas erupted very rapidly in a rather short interval of less than a year at the KTB leading to several biological and geological anomalies at the KTB. Hence it is of immense importance to obtain the precise age and duration of Deccan volcanism, one of the methods to achieve this being palaeomagnetic dating technique. Several palaeomagnetic and rock magnetic studies were carried out over different parts of the DVP.  Geochemical and mineralogical studies have shown that these flood basalts are of tholeiitic composition and consist of different flows, which mainly comprise massive, vesicular, amygdoloidal basalt, tuff and breccia. In addition to obtaining the past geomagnetic field and its secular variations, the magnetic mineral may contribute as a clue of special environment along it was growing. The change in kind, structure, shape, and size of magnetic minerals may change its magnetic properties. The change on magnetic mineral represents specific information related to environments and even a climatic system that has been influenced. Applying the environmental magnetic technique to different depositional system in the DVP will help determine the relation between the magnetic susceptibility of rocks, the concentration of magnetic minerals, hydrothermal alteration etc which will aid in reconstruction of palaeoenvironmental/climate change; magnetostratigraphy etc of DVP.

Sub-basalt imaging has always been a challenge to the geo-scientific community. Since the entire DVP (including on land and offshore) is blanketed with lava flows, the nature of the underlying pre-volcanic geology and tectonics remains speculative, both in point of view of resources as well as hazards. Hence, it is of paramount importance to probe below the traps using geophysical methods. Recently, sub-basalt imaging using seismic tomography in the northern part of the DVP of Maharashtra, delineated a layer of Mesozoic sediment below the traps (Behera & Sen, 2014). Studies using potential field and high resolution seismic reflection data along few profiles in the off shore Kerala Konkan basin delineated the presence of pull apart structures below the trap flows (Kalra et al, 2014). Under this program, sub-basalt imaging will be attempted using potential field (magnetic & gravity) data in conjunction with electromagnetic methods (MT, LMT etc). 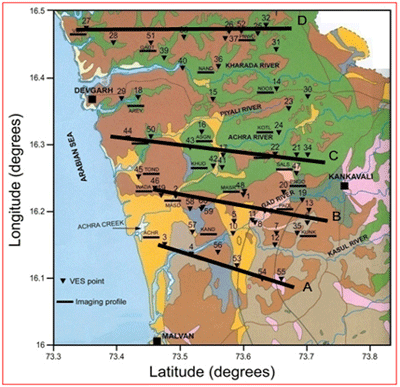 Saltwater intrusion into the coastal aquifer has long been recognized as a major concern around the world. The intrusion occurs as a result of the induced flow of seawater into freshwater aquifers originally caused by groundwater development around the coast. The induced gradients usually cause migration of salt water from the sea toward a borehole where groundwater is being pumped from aquifers that are in hydraulic connection with the sea. This will definitely make the freshwater in the well unusable and thus hamper the development of potable water for public use. Groundwater resources along west coast Maharashtra are vulnerable to saltwater intrusion and to contamination by nutrients. Nutrient contamination results from human and agricultural activities and has caused widespread increase of several ions in groundwater, ultimately affecting the structure and function of coastal ecosystems. The increase in salinity will produce consequent decrease in electrical resistivity of water, and thus resistivity varies with depth within groundwater well in coastal aquifer. These variations could then be mapped by methods capable of detecting differences in salinity. Electrical resistivity surveys, the most commonly applied geophysical method for measuring apparent resistivity of subsurface materials, will be undertaken in the Ratnagiri district of Maharashtra for delineating saline water ingress and aquifer mapping. 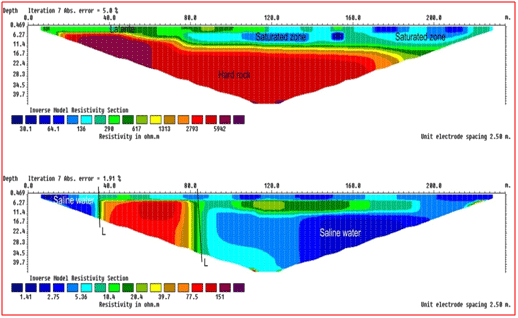 The earlier crustal deformation studies using GPS data in Western Maharashtra (Reddy et al, 2000), have suggested crustal field strain in Deccan Trap region. These studies show E to ENE ohspace="8" vspace="8" rientation for the maximum horizontal compression at the present time. It is not known for how long this orientation of horizontal compression been prevalent in the Deccan Trap region. The decadal strain accumulation from resurveying any of the existing GPS sites can reconfirm the scale of variations in strain of stable continental regions. The recent micro-seismic activities observed in some of the regions and the earthquake of the Killari 1993, the Koyna 1963 caution us not to neglect or ignore and term these as totally hazard free. GPS geodetic studies will be undertaken along the western DVP of Maharashtra, to re‐confirmation the low tectonic activity in the western Maharashtra region from past two decade of GPS observations.