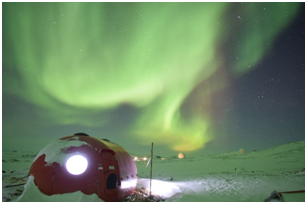 I am wintering at Antarctica and it is a great feeling to be on top of the world, literally. The vast expanse of ice, the chilling and biting cold, and the prolonged night that spills into days and then into months, gives a surreal feeling of being in a place that is ‘out of this world’. The dancing lights further add to this mystique. The ‘painted curtains’ furling in the jaded polar nights add a dash of aura that surreptitiously brings one close to divinity.

Aurorais a natural display of different colored lightsthat brighten up the polar skies. Aurorae are mostly confined to Polar Regions. The northern (Arctic) aurora is called ‘Aurora Borealis’ or ‘’northern lights’’. The southern or Antarctic is called ‘Aurora Australis’ or ‘dawn of the south’. These lights are usually seen above the magnetic poles of the northern and southern hemisphere.

Aurora displays can be seen in many colors, although pale green and pink are the most common. Shades of red, yellow, green, blue, and violet are sparsely seen. The lights appear in many forms like patches or scattered clouds of light, streamers, arcs, rippling curtains or shooting rays that light up the sky with a strange glow.

Auroras are generated when the Earth's magnetosphere is adequately disturbed by the solar wind. The solar wind is a stream of charged particles released from the upper atmosphere of the Sun. In normal circumstances, the Earth’s magnetic field blocks most of the solar wind. But when there is high solar activity, the relatively weak magnetosphere in the Polar Regions is not able to ward off the strengthened solar wind. At high-latitude areas, especially the Polar Regions, the magnetic field is vertical, which can provide easy access for these particles to enter Earth’s atmosphere to interact with various constituents present in the atmosphere. During this interaction there is transfer of energy from the solar wind to the atmosphere, which heatsup, and is excited. The excess energy is released to the atmosphere which is seen in the form of moving or dancing lights.

The auroras can only be seen at night because their light is not as strong as the day light. It can be seen from long distances, as they stretch in the sky for hundreds of kilometers. The phenomenon of aurora display has also been observed on other planets that have a magnetic field, such as Jupiter, Saturn and Mars.

This year we observed many astonishing scenes of Aurora Australis at BharatiIndian Research station, Antarctica, between April and August 2018.

During my stay at Antarctica I have deduced a relationship between Digital fluxgate magnetometerfluctuations and aurora occurrences. It has given me the ‘power’ to predict sightings of aurora at my Bharati station. As and when I see magnetometer fluctuations cross a certain threshold limit, I announce and urge my fellow station members to get ready to soak in the dance of light. As predicted, dancing auroras spreadoverthe sky in different hues and colors. Within no time the entire white ice turns into green. Sometimes these auroras are so intensely bright green in color that the entire environment around our station turns green. The lights are so bright that it is hard to believe we are in the thick of a ‘night’. However, such bright occurrences are rare and they form only when strong geomagnetic storm visits us.

On sedate normal days, I have observed, many times, a faint green colored ribbon that sweeps from the north-east sky to the south-west sky. The occasional visitors like us, on call of duty, get used to the environment and the faintest of color changes. It is such a thrilling experience to bathe in the colors flung on us by nature. It makes my heart go wild when my aurora predictions come true.

I have earlier wintered at Bharati during the 35th Indian Scientific expedition to Antarctica which lasted from December 2015 to December 2016. It is my good fortune to be again wintering at Bharati Indian Research Base station as Deputy Leader of 37th expedition.