Introduction:
Geotectonic Research involves studying about the structure, tectonics and geodynamics of the solid Earth.  It also involves in combining the different observations from geophysical and geological studies to get an extensive picture of the Earth. Different observations carried out by our Institute are electromagnetic, geopotential methods, paleomagnetism, geochemistry and petrology.

In EM techniques, we carry out Magnetotellurics (MT) methods that is used to determine the electrical resistivity distribution within the Earth’s  from measurements of natural, time-varying magnetic (Hx,Hy and Hz) and electrical fields (Ex and Ey) at the Earth's surface. The fields originate from electrical currents in the ionosphere and magnetosphere which induce secondary currents in the conducting Earth. Presently, MT surveys are being conducted over geothermal zones in the Maharashtra.

Geopotential methods involves in study of gravity and magnetic methods. Gravity method is used to detect and identify subsurface bodies within the Earth by using density changes of rock bodies. The magnetic method is a non-invasive geophysical method which measures perturbations in the Earth’s magnetic field caused by magnetic minerals in crustal rocks.  To bring out hidden structures beneath Deccan traps both magnetic and MagSat data were analyzed over Deccan volcanic province (DVP).

Paleomagnetism group is working to establish the Pole Positions, Continental and Paleogeographic reconstruction, Magnetostratigraphy, Rock magnetism and Anisotropy of Magnetic Susceptibility in different parts of the Indian subcontinent. Record of geomagnetic reversals preserved in volcanic and sedimentary rock sequences (magnetostratigraphy) provides a time-scale that is used as a geochronologic tool.  Geochronology provides the age of materials that can be used to interpret Earth’s Timeline and history.

Geochemistry and petrology focuses on the study of the chemical composition of rocks and minerals. Presently, Paleomagnetic and petrological studies have been undertaken over Malwa plateau of DVP (Deccan volcanic province). 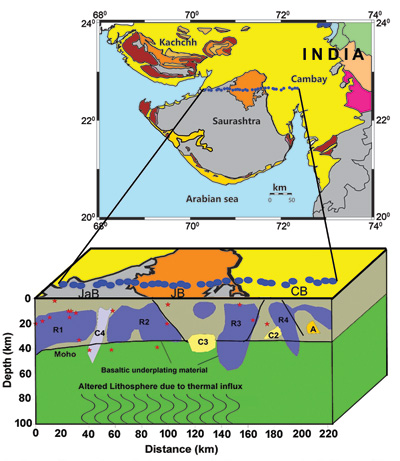 Significance of this Research:
The magnetotelluric method is a passive geophysical technique that is widely used to image the electrical resistivity distribution inside the Earth ranging in scale from the shallow crust to the deep lithosphere. MT can provide insights into the evolution of the lithosphere. It is useful in mapping petroleum bearing strata, geothermal regions, surfacial salt domes and volcanics or karsts, where seismic technique fails due to absorption of seismic energy in such complex geological regions. Apart from this, MT is used to map conductivity anomalies related to aqueous fluids and partial melts in active regions. This method helped in bringing out different conductivity zones across India that resolved the complexity of the region. Different basins hidden beneath DVP have been identified by using this technique.

The geopotential group was instrumental in bringing out a composite magnetic anomaly map of the Indian sub-continent. Contrary to the belief that magnetic data cannot see below the traps, ground magnetic data acquired by the group in conjunction with the gravity anomaly map could successfully map the regional subsurface structures within the trap covered regions of Maharashtra. Recent studies by this group helped in delineating Archaeological structures in Keeladi, Tamil Nadu, which aided in excavation for the Archaeologist. Studies carried out by this group using the shipborne magnetic and satellite gravity data helped unravel the crustal structure of some of the aseismic ridges in the northwest Indian Ocean.
Palaeomagnetic and petrological studies on Deccan Traps have been extensively carried out during the last four decades. However, most of these studies focus on the Western Ghats, especially the Pune–Mahabaleshwar section where a 2000 m thick sequence of lava flows is exposed. The Northern Deccan Province, comprising the Mandla, Malwa, Toranmal and Pavagadh sections have not been received much attention despite covering a significant geographic terrain. Paleomagnetic and petrology group is focusing on understanding the chronological and genetic relationship of the voluminous southern province with the northern segments for better constraining the tectonomagmatic history of the Deccan Traps.

Short description:
MT and LMT units are used for obtaining resistivity structure of the Earth in the depth range of 1-100 km.
Gravity and PPM are used for regional as well as local surveys for identifying anomalous zones in crust.
Paleomagnetic instruments are used for obtaining the information about the Earth's magnetic field in the geological history recorded in the natural remnant magnetization of rocks.
The petrological laboratory group of KSKGRL is engaged in the doing the detail petrography of all types of rocks including the studies of magnetic minerals which is help in paleomagnetic studies