Introduction
Over the equatorial and low latitudes, the differential heating of the Earth’s surface due to solar heating provides the main driving force for the production of variety of atmospheric waves. Once atmospheric waves are generated at the surface, they propagate to the mesosphere-lower thermosphere (MLT) region as atmospheric density decreases exponentially with height leading to enhanced wave amplitudes of these waves. While many of these waves break due to temperature inversions and causes secondary waves, few of them escape to the ionosphere directly. Accordingly, the quiet time neutral dynamics and electrodynamics of the Earth’s upper atmosphere are strongly influenced by planetary waves, tides and gravity waves which are propagating from the lower atmosphere under both quiet and extreme weather conditions. The large- and medium-scale travelling ionospheric disturbances (LSTIDs and MSTIDs) are another source of ionospheric variability. Hence, the quiet time variability of the equatorial and low-latitude ionosphere is a complex interplay between neutral- and electro-dynamical coupling leading to the variability in the large scale dynamical processes such as Equatorial Electrojet (EEJ) or Counter Electrojet (CEJ), Equatorial Ionization Anomaly (EIA) and Equatorial Spread-F (ESF) irregularities.
As IIG has a strong observational network of radio and optical instruments deployed at several sites, it is natural to address the whole atmosphere-ionosphere coupling under this group that would benefit largely from our vast experiences with the ongoing research activity. This area of research is designed so as to advance our understanding of the coupling processes and further our predictive capabilities in certain areas, like for example, the occurrence of equatorial plasma bubbles and the radio wave scintillation that is caused by a wide range of ionospheric irregularities. The radar observations from Tirunelveli and Kolhapur may be used in a series of studies aimed at understanding the short-term variabilities of the MLT region and how these variabilities couple to the ionosphere above. Accordingly, under this research,it is proposed to undertake an investigation into the complex variability of the ionospheric plasmadensity structures and density irregularities using the network of ionosondes, radars and GPS receivers. Spaced GNSS receivers at Tirunelveli which are separated by few 100s of meters have been setup to obtain the zonal drifts of the plasma bubbles. Advanced statistical tools such as artificial neural networks and machine learning techniques havebeen utilized to understand the prediction of equatorial plasma irregularities and scintillations. As radio waves are affected by the presence of ionized medium, radio wave propagation characteristics in the HF band and their ray tracing techniques havebeen utilized. Recently launched satellites such as NASA’s GOLD and ESA’s SWARM have also been utilized to provide maximum possible scientific interpretations. 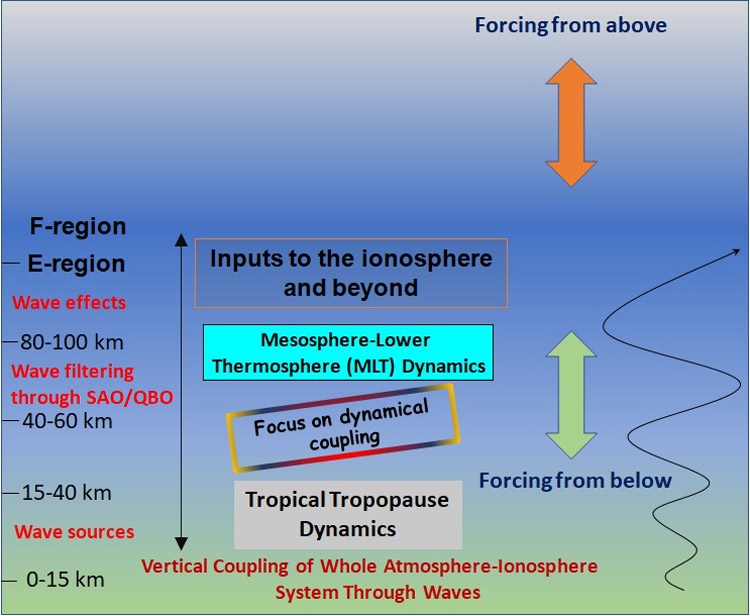 Significance of this research

The forcing from the below and above will have significant impact on the radio wave communicationsand GPS navigation. Since we depend on satellite communication for many of our day to day activity, the space weather and its impacts on the GPS navigation and radio wave communication has significant role to play. Study and predicting the ionospheric scintillations will have implications for aircraft landing and positioning accuracies. The operational forecasting of GPS range errors, probability of EPB/scintillation occurrence and their location, intensity, duration and dynamics are believed to be impacted by the forcing from the above and below. The studies that are conducted here have potential applications for navigation and radio wave propagation methods. The investigations using the radio wave probing techniques also led to enhance the understanding of the scale-size dependent characteristics of ionospheric plasma irregularities and ionospheric scintillations, their evolution and their solarflux dependency.Thestudies that we do here can help us understand the radio wave propagation and their impacts on the radio waves. 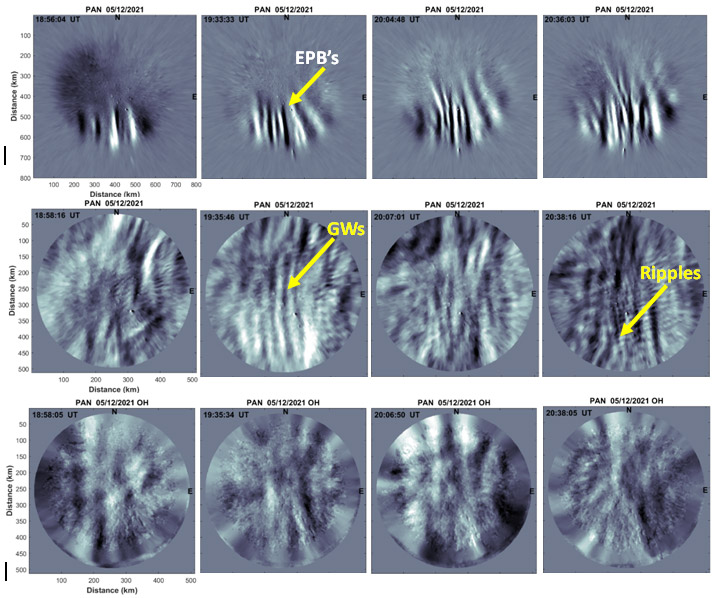 Instruments and locations
Radio remote sensing is the most powerful tool that has been traditionally exploited by space science community to probe the near space environment that essentially comprises of the Earth’s partially ionised upper atmosphere. Electromagnetic disturbances and energetic particle events originating on Sun pose severe threat to the satellite communication and navigation systems operating over a wide range of frequencies besides the underground power lines. This disturbed space weather can be effectively monitored by ground-based active and passive radio probing techniques.
Optical remote sensing tools are also used by this group in addressing vertical coupling of atmospheric regions. The instruments deployed are also capable of observing ionospheric disturbances caused by geomagnetic storms and space weather events. Such observations will be complementary to other ionospheric data obtained from radio sounders mentioned above. 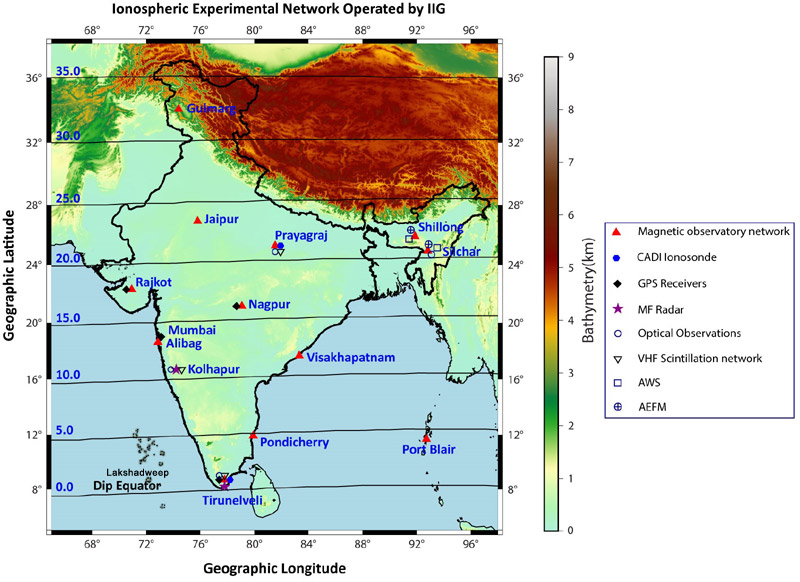