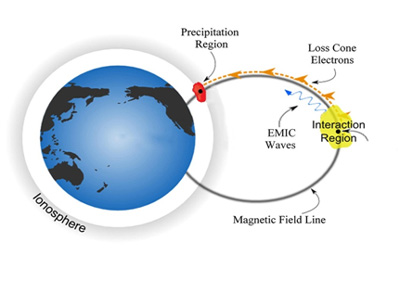 Earth and planetary magnetospheresare complex due to the presence of numerous  plasma waves and instabilities, and energetic particles. IIG’s MIPAG focuses on unravelling this complex dynamics of near-Earth space plasma regions by investigating various physical phenomena such as generation of waves, their source regions, energeticparticle injections and transport, particle acceleration and loss processes. In space plasmas, wave-particle interactions are thought to be important for the formation of the different boundary layers, in generation of various electrostatic and electromagnetic waves, precipitation of particles causing aurora, etc. The wave fields scatter the particles thereby altering the momentum and energies of the particles. The presence of waves can hence introduce dissipation in otherwise collisionless plasma.Major waves influencing the near-Earth and planetary space dynamics through wave-particle interaction processes include, Chorus, Hiss, kinetic Alfven waves, Electromagnetic ion cyclotron (EMIC) waves, magnetosonicwaves etc. An example of such wave-particle interaction process is depicted in the schematic (Figure1). Nonlinear electric field structures contribute significantly to  particle accelerations in the Earth’s magnetosphere and planetary atmospheres.

Likewise the earth's Atmosphere-Ionosphere forms a dynamical coupled system, and are strongly governed by the forcing from below and above in a very complex manner(Figure 2). From the topside, sun is the ultimate driver of the processes. The characteristics of solar wind and the interplanetary condition changes during space weather events have profound effect on earth’s ionosphere. Likewise gravity waves, lightning and thunderstorms, cyclones, etc. of terrestrial origin falls in the category of forcing’s from the below. Current research understanding indicates that these forcing’s from below play important role in atmosphere-ionosphere dynamics.

Significance of this Research 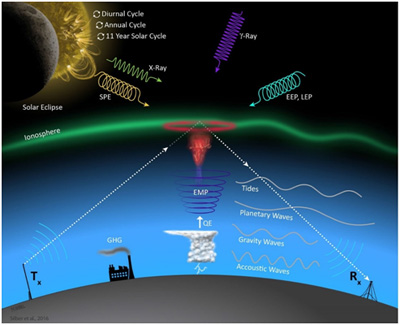 The relativistic electron decreases/dropouts (REDs) or in general, energetic particle loss from the Earth's magnetosphere has been recently gaining attention in the scientific community due to its potential impact on the atmosphere.Enhanced fluxes of theseenergetic  particles entering the atmosphere can produce significant and widespread degradation in short-wave radio propagation and in rare extreme cases, even radio blackouts. The energetic particles also contribute to astronaut radiation exposure. Hence it is important that we study such precipitation events on a global scale to obtain insights about global ionospheric convection patterns.

Probing the variability of electron and ion fluxes during magnetic storms, substormsand  IP shocks will provide the understanding the radiation belt dynamics  which is an important aspect of Space weather. It also provides the coupling of magnetosphere-ionosphere system.

Planetary atmospheres are useful to understand the atmospheric loss processes with varying background parameters for each planets.  Observations of multiple parameters like electric field, magnetic field and plasma properties, the uniqueness of each planetary body and its satellite can be realized which can unravel more fundamental aspects of the solar system itself.

Simulation of electric field structures will provided better understanding of the acceleration processes in Earth and planetary environments.

Understanding the evolution and characteristics of the coupled Earth’s atmosphere-ionosphere system due to geophysical forcing from above of solar origin, and forcing from below of terrestrial origin related to dynamics associated with lightning discharges, severe weather events, tropical cyclones etc.