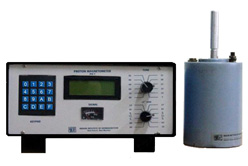 Introduction: A Proton Precession Magnetometer is an instrument that measures the scalar intensity of the local magnetic field and relies upon the proton-precision measurement technique. This is a well-established technique and is successfully implemented in classical proton precision magnetometers. PPM derives its name from the fact that it utilizes the Precession of spinning protons or nuclei of the hydrogen atoms in a sample of hydrocarbon fluid, to measure the total magnetic field intensity. With this primary purpose of generating the ground based magnetic data, the Indian Institute of Geomagnetism (IIG) for the last 3 decades have been developing low cost high precision 0.1nT Proton Precision Magnetometers (PPM).

PPM utilizes the Precession of spinning protons or nuclei of the hydrogen atoms in a sample of Hexane to measure the total magnetic intensity. The spinning protons in this sample are temporarily aligned or polarized by application of a uniform magnetic field (hundreds of Gauss) generated by passing a current of 1-2 A through a coil of inductance 30 mH [2]. After 7-8 seconds, maximum number of protons are aligned in the direction of the applied field. When the current is stopped (the external field is switched off suddenly), the spin of the proton causes them to process about the direction of the ambient or Earth’s magnetic field. The processing protons then generate a small signal (an induced emf) in the same coil which is used to polarize them, whose frequency is precisely proportional to the total magnetic field intensity and independent of the orientation of the coil.