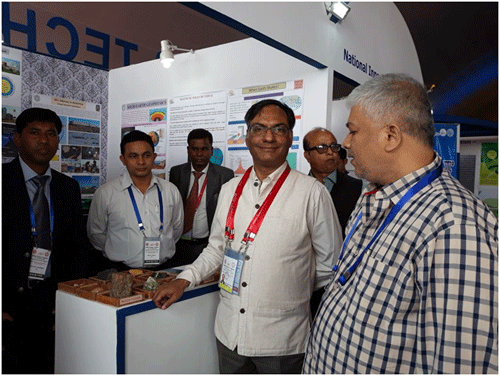 The Institute participated in the 105th Indian Science Congress held at Imphal, Manipur, from 16-20 March 2018 with a group consisting of four faculty members. IIG participated in the Science Expo as a part of Department of Science and Technology (DST) pavilion. The focal theme of the Indian Science Congress – 2018 was “Reaching the unreached through Science and Technology”.

The “Pride of India” science pavilion was inaugurated by the Hon’ble Minister for Science and Technology and Earth Sciences, Dr. Harsh Vardhan in the presence of Secretary, Department of Science and Technology and other dignitaries. The Institute put up an exhibition of colorful posters depicting the “Science of Geomagnetism and Allied Fields”. A few posters on the theme of the Science Congress were specially made and displayed for the public. In addition, a few equipment used for collecting magnetic field data and various science Models were also put on display. The scientific models of IIG’s research activities such as Earth’s Magnetosphere, Plasma Sphere, Seismometer, etc were exhibited along with illustrating posters to create scientific awareness in common public including school/college students.  The IIG participants at stall in DST pavilion and at solar telescope were constantly engaged in demonstrating the scientific models and their working principles in a lucid manner so as to reach out to a large audience and create awareness in the common public.  IIG also distributed science comic books and other literature to visitors. The participation and demonstration of IIG’s exhibits received huge applause and wide coverage in the national/local print and electronic media. The main attraction for students and common public was the Solar Telescope put up by the Institute. The students and public at large could view the solar corona, sun spots, solar flares and prominences.